This kind of exposure is really exciting so we wanted to share it with you!
Continue reading...
Oct 27, 2014 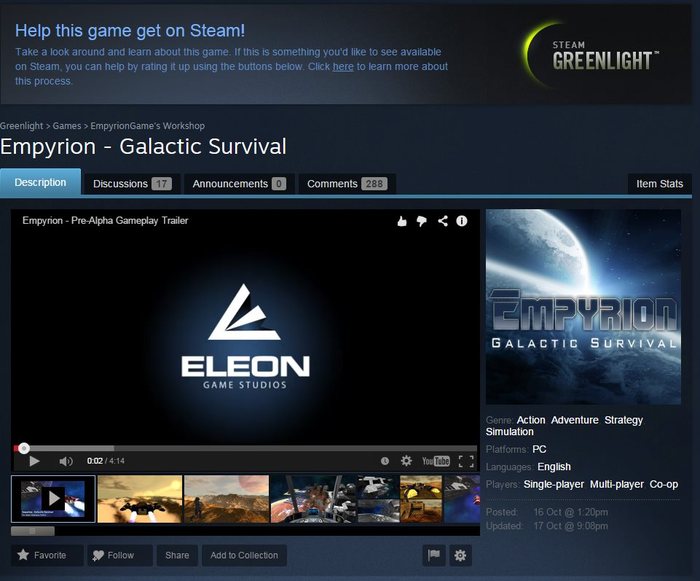 After 10 days on Steam Greenlight, Empyrion reached 50% of the way to the top 100! Thanks for your up-votes! We got more than 65% "yes votes", which is an amazing percentage for Steam Greenlight. It seems that people really like what they see when they see it. That being said, we need more exposure for Empyrion. Please help us spread the word about the game.

We are confident that the demo will help boost this campaign. Currently, we are working hard on it and we are still on track. It will be finished in time to help this campaign.

Please bear with us and stay tuned. Thanks for reading!
Continue reading...
Oct 23, 2014

Oct
23
by Kane Hart at 11:10 AM (1,365 Views / 3 Likes) 0 Comments
I'm changing this layout more to adapt to the ever changing information pouring in from around the Internet. Normally its been mostly just questions and answers but not always the case.

Kickstarter Comments:
With such a large world, i'll be interested to know how you are going to add enough interest for players to explore on the planets? How will you make exploration worthwhile? Will there be secrets?
Do you plan to add a customization ship system ? (I mean create your own design) Is it possible to play the whole game in single player ?
How in-depth is ship designing going to be compared to say, Space Engineers and will there be asteroids?

Oct
21
by Kane Hart at 10:10 AM (2,631 Views / 1 Likes) 8 Comments
The Invite a friend program has now closed. If you missed it there was this program running that if you invited 7 friend to Empyrion that you would receive a free Alpha key at release. Everyone should of also received a email around 10 hours from this post if they were successful or not.

We hope you will continue referring your friends to the Kickstarter and help make Empyrion a Success!

Congratulation to all the winners and thank you if you won or loss for your support!

THE INVITE-A-FRIEND PROGRAM IS CLOSED NOW.
We would like to thank all of you who have participated. We received a LOT of registrations. Thanks for spreading the word!
And the winner is….SibstLP. We would like to congratulate for having successfully invited 173 friends! You will receive 24 keys when the Alpha is released.
Click to expand...

Oct
20
by Kane Hart at 11:54 PM (1,788 Views / 1 Likes) 9 Comments
Another around of Questions and Answers around the Internet. You might notice not all them are Q&A Format as I don't want to tamper the originality of it. But it should help sum a few questions people might have.

Steam Discussion:
Q: Is this game going to be moddable?

Q: Can there be factions?

Q: How many planets are there?

Q: How many Galaxies are there?

Q: how big can the motherships get?
Q: Not another spore game please.

Oct
20
by Kane Hart at 7:49 AM (3,633 Views / 5 Likes) 3 Comments
So once every few days or even week, depending how slow or fast questions are being answered around the Internet by the devs. We will be summarizing some of these questions and answers in one place. If you have anything you might of heard from another source then please feel free to share it with us!

Kickstarter Comments:
Q: Will your game be DRM-free?

Q: How is the craftingsystem going to work?

Q: Is there a character creation, customisation 2-Character upgrade like stamina speed strenght hungry sleep 3-Can we hire companions (with skills), a crew for our ship

Q: A question, guys, if I may? For the double and triple packs, do I understand correctly that it's 2 or 3 full copies from alpha on, at those tiers?

Q: Question as well. In multiplayer, do both players have to be on the same planet or in the same solar system at the same time?

Q: Will you be offering a DRM free standalone (non steam options - there are plenty who will not use Steam at all.) for backers at all?

Oct
20
by Kane Hart at 6:09 AM (2,178 Views / 2 Likes) 4 Comments
I'm really excited and proud to announce Empyrion on Kickstarter!
"Empyrion is a 3D open world, space survival adventure in which you can fly across space and land on planets. Build, explore, fight and survive in a hostile galaxy full of hidden dangers."

Will be changing a lot of things on the forums over the next couple of weeks. If you have suggestions or comments then feel free to share them with us here.

This site is meant to serve as a community gateway with the latest news and much more.
Continue reading...
Page 42 of 42
XenPorta © Jason Axelrod from 8WAYRUN.COM